Balboa Park is the city’s cultural centre and incorporates 16 museums and the celebrated San Diego Zoo. There is more family entertainment at SeaWorld, San Diego Zoo Safari Park and LEGOLAND, while north of the city are sandy beaches, surfing and world-class golf. An important US Navy base to this day, San Diego also has a strong historic association with the sea, evident in the maritime attractions at its Embarcadero waterfront. 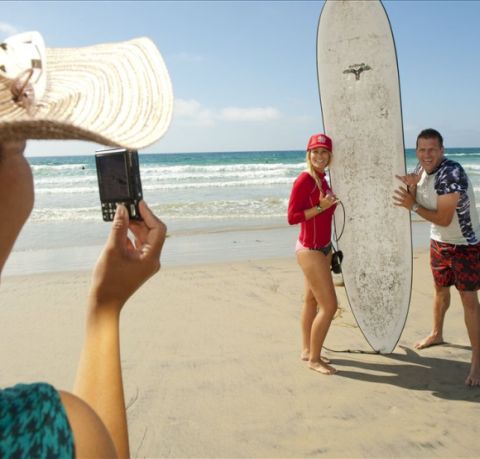 Imagine the wind in your hair, the sun shining and the sea glittering. This is the California Coast. Rent an open-top Mustang and put the joy back into driving. Along the road you will visit the icon...

Why should I visit San Diego and La Jolla?

TIP  Board a trolley to explore San Diego’s attractions and avoid the nightmare of finding parking spaces. They even run to the Mexican border, less than 20 miles from downtown, so you can cross on foot and explore Tijuana.

TIP  If you want to drive your hire car from San Diego into Mexico, advise the rental company when you pick up the vehicle to ensure they allow it. If they do, they will add the required Mexican insurance to the daily rate.

Downtown San Diego is a thriving hub of shops, restaurants, attractions, and sports and cultural institutions which throngs with visitors and locals. Very much a walkable area, it takes in the restored Victorian and Italianate buildings of the Gaslamp Quarter, Embarcadero’s historic sailing ships and San Diego Aircraft Carrier Museum, the upmarket Horton Plaza shopping centre, performing arts centres including the recently-restored 90-year-old Balboa Theatre, quirky Seaport Village alongside the city harbour from where you can take a harbour cruise, Tuna Harbour – once home to the world’s largest tuna fishing fleet – and neighbourhoods such as bohemian Little Italy and the Asian Pacific Historic District.

Gaslamp Quarter  Named after the wrought-iron lamps lining the streets, now converted to electricity, this vibrant US National Historic District buzzes with its plethora of restaurants, chic boutique stores and hip nightlife amidst historic buildings including the ornate Louis Bank of Commerce – the city’s first granite building where gambler and gunman Wyatt Earp ran an oyster bar in the 1880s and which later housed a notorious brothel.

TIP  The wooden William Heath Davis House is the oldest surviving structure of San Diego’s waterfront New Town, built in 1850 by the man who unsuccessfully tried to develop what would eventually become the Gaslamp Quarter. It houses the Gaslamp Quarter Historical Foundation.

A huge, 1,200-acre public park in the heart of San Diego, it began life in 1868 as a scrub-filled area known as City Park overlooking today’s downtown and is now a cultural and leisure haven that takes in major museums, performing arts venues including the Tony-Award winning Old Globe Theatre, landscaped gardens, recreation facilities, landmark buildings and a host of attractions led by San Diego Zoo. Horticulturalist and benefactor Kate Sessions began its transformation in 1892, donating and planting trees and shrubs to help beautify it, earning her the title of “Mother of Balboa Park”.

San Diego Zoo  Enjoy close encounters of the furred kind with rare and endangered animals in recreated natural habitat environments at this globally-important conservation institution. Among its 4,000 animals from 800 species are giant pandas as well as koalas stars of the exhibition – Koalafornia Dreamin’!

San Diego Natural History Museum  This venerable institution more than doubled in space when it reopened after major reconstruction following the park’s millennium celebrations. It highlights the unique biodiversity of Southern California and has a giant-screen 3D theatre showing films focusing on the natural world.

TIP  Balboa Park has theatre and music performances, events, exhibitions and horticultural displays throughout the year. Check the website (www.balboapark.org) and plan a visit to coincide with one you want to see.

The birthplace of not only San Diego but also California, what is now Old Town was first established after Mexico won independence from Spain in 1821 – California was part of Mexico until it joined the Union in 1850 – initially with a small Mexican community of adobe buildings and then as an American settlement. It was largely destroyed by fire in 1872 and a new town was developed neared the water. Old Town San Diego has almost two dozen historic sites plus Mexican restaurants, shops and hotels. Mission Valley is where the first of California’s 21 Spanish missions was established, while around it the area has become a major draw for its shopping malls including upscale Fashion Valley Mall, dining and entertainment. Boutique shops and restaurants offering local produce can be found in Uptown areas such as Mission Hills, South Park, North Park and University Heights, while neighbouring Hillcrest is the home of San Diego’s LGBT community and has bars, galleries, bookshops and festivals including the summer Gay Pride Parade.

Mission Basilica San Diego de Alcala  California’s first Spanish mission, known as the “Mother of the Missions”, is still active today as a Catholic parish church. It was originally built in 1769 but was moved six miles west to its present site after being burnt down by American Indians five years later.

Old Town Trolley Tours  Narrated, two-hour tours of San Diego covering 25 miles and over 100 points of interest operate from the Old Town Transit Centre, next to the state historic park, where there is a free car park. Passengers can hop on and hop off.

TIP  The Whaley House, a museum which was built in 1857 on the site of gallows and later served as the county court house, is said to be one of the most haunted houses in America.

Coronado is a peninsula in San Diego Bay, just offshore from downtown. It can be reached by ferry from Seaport Village and is attached to the mainland by a 10-mile isthmus as well directly from the city by the 2.2-mile Coronado Bridge. It is home to the North Island Naval Air Station and has attracted holidaymakers to its fine white, sandy beaches for well over a century. Its oceanfront is dominated by graceful early 20th-century homes and buildings, one of which houses the Coronado Museum of History & Art. Most notable building of all is the 125-year-old landmark Coronado Hotel, where the beach is rated one of America’s most family-friendly. Take sport fishing boat trips into the Pacific from Shelter Island, reached by road from Point Loma Peninsula. Just across the San Diego River from the peninsula is 4,200-acre Mission Bay Park, a natural water playground with Pacific-facing beaches. The park is also home to SeaWorld San Diego.

Hotel del Coronado  Known locally as The Del, this classic, wooden beach resort is famous for its signature red-peaked roofs and has welcomed presidents, royalty, movie stars and the general public since 1888.

Cabrillo National Monument  America’s third most-visited national monument, it marks the actual spot where Cabrillo landed with a statue of him on the cliff above and a visitor centre. Nearby clifftop Old Point Loma Lighthouse was built in 1855 but replaced by a shore-level one in 1891 as it was often obscured by low cloud.

TIP  The glass-enclosed Whale Watch Lookout on the cliffs at the Cabrillo National Monument is one of the best land-based spots to see the annual southward migration of grey whales between December and April. Alternatively, take a whale watching boat excursion from Mission Bay or Shelter Island.

Exploring La Jolla and the beaches beyond

Attractions include La Jolla Playhouse, the Museum of Contemporary Art and the Birch Aquarium at Scripps, the public interpretive centre for the University of California, San Diego’s research establishment the Scripps Institution of Oceanography. Carslbad is home to theme park LEGOLAND, while the 1,800-acre San Diego Zoo Safari Park is located in the San Pasqual Valley. There are surfing beaches all along the coast, including at Oceanside, where the sport is celebrated at the California Surf Museum. Mission San Luis Rey de Francia, the largest of California’s 21 Spanish missions, is just inland.

Birch Aquarium at Scripps - With over 60 tanks of marine life and three outdoor, living tide pools on a bluff overlooking the Pacific, this oceanographic museum showcases research discoveries and promotes ocean conservation.

Torrey Pines State Natural Reserve - This 1,750-acre coastal park of pine forest and sandstone canyons is a wilderness oasis amidst an urban jungle and has many hiking trails to explore.

California Surf Museum, Oceanside - Founded over 25 years ago, the museum preserves surfing heritage with displays charting the history of surfboards from surfing’s roots in Polynesia to boards used by current champions.

TIP  Beach-lovers should avoid May and June, when the San Diego area is shrouded by cloud most days, known locally as “May Grey” and “June Gloom”. From September and throughout autumn, the Santa Ana winds bring hot, dry air from the desert, making for balmy temperatures and little rain.

Imagine the wind in your hair, the sun shining and the sea glittering. This is the California Coast. Rent an open-top Mustang and put the joy back into driving. Along th...

From National Parks to Disneyland | California for the Whole Family

Receive a FREE airport lounge if you book this suggested itinerary This holiday takes in most of the best bits of California, San Francisco, a national...