Georgia is a state with many faces, all of them attractive.  From the sleepy Golden Isles guarding the Atlantic Coast to the southern end of the Appalachian Trail, you will have plenty to do and see.  Atlanta is bustling modern city but many would say that Georgia's charms are in its southern charm and hospitality, the antebellum plantation homes and its rural countryside. 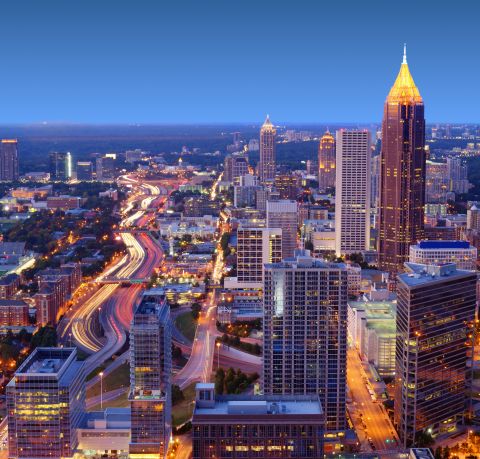 Why should I visit Georgia?

Known as the Peach State, Georgia was established in 1732 and was the last of the Thirteen Colonies to be created; nearly 150 years later it was the last to be re-admitted to the Union after the war. History abounds and you can see many sites from the Civil War which swept across the Southern States as well as the American War of Independence. But history is more than wars and Georgia is certainly known for its musical heritage having stars such as Ray Charles, Trish Yearwood, the Zac Brown Band and Otis Redding calling Georgia home.

Milledgeville - a former capital of Georgia and crucial to Georgia in that it was here that the decision to leave the Union was taken.  It has a quietly dignified and collegiate atmosphere with tree lined avenues and rows of white columned Antebellum-period houses shaded by dogwood trees.  Visit the Old Governor’s Mansion, one of the most perfect examples of Greek Revival architecture, home to Georgia’s governors from 1838 to 1868 and occupied by General Sherman on his March to the Sea. You can also see Georgia’s Old State Capitol building, St Stephen’s Episcopal Church which quartered General Sherman’s horses and the beautiful 1825 Stetson-Sanford House. Also worth a visit is the Lockerly Arboretum and, if you are a fan of Flannery O’Connor’s books, Andalucia is the farm where she lived.

Madison - on the Antebellum route, was spared from the destruction that was wrought on much of Georgia by General Sherman as its Governor was a friend.   The private houses all look much as they would have 200 years ago.  Wooden porches, many adorned with the Stars and Stripes, with rocking chairs on the decks to receive neighbours and talk about the state of the nation. Visit the 1811 Heritage Hall once part of an in-town 4-acre plantation and home to the town’s doctor.  You can see the original artefacts including the doctor’s amputation kit and the tiny corsets women had to wear.  Madison is surrounded by rolling countryside, red barns and cotton fields. Madison is well worth an overnight stay and we recommend the James Madison Inn.

Augusta - Known to all golfers (and many non-golfers) as the home of the Master’s Golf Tournament, Augusta is Georgia’s second oldest city and alive with music, shops, art galleries and a beautiful Riverwalk along the Savannah River. Sadly, we cannot get you an entrance onto Augusta’s hallowed greens but we can introduce you to great tapas, classic Southern fare and farm-to-table cuisine.  Ride through Phinizy Swamp Nature Park or visit the August Canal Discovery Center. Frontier America recommends the Partridge Inn in the residential area.

Macon - “Where Soul Lives”! So they say. Home of Otis Redding whose life size bronze statue is in the town. Macon is a historical town with wide avenues lined with Antebellum mansions, art galleries and boutiques. You can hike though ancient Indian mounds and see Georgia’s largest collection of African American historical sites. Amazingly for a fairly small town, Macon is home to 6,000 National Register historic structures in 14 historic districts. The 1842 Inn Bed and Breakfast is a beautiful home turned inn.

Antebellum Trail and Plantation Houses - Like much of the Deep South, Georgia has some beautiful Antebellum (literally before the war – in this case the Civil War) houses and plantations. The Antebellum Trail is a 100 mile journey through 7 communities that escaped Sherman’s attention.  It takes in not only Madison, Midgeville and Macon but Athens, Watkinsville, Eatonton and Gray-Old Clinton.  Sadly, the Tara of Gone with the Wind fame only existed in a Hollywood lot, but apparently the Stately Oaks Plantation in Jonesboro was the author’s inspiration. You can stay at The Twelve Oaks, an 1836 plantation home used in countless films.

The Southern Appalachian Mountains and the Wine Country - The Chattahoochee National Forest spreads across North Georgia, taking its name from the Chattahoochee River whose headwaters begin in the North Georgia Mountains and flows to the Gulf of Mexico.  Georgia’s Southern Appalachian Mountains lay claim to the end of the Blue Ridge Mountain Range as well as Georgia’s highest point, Brasstown Bald and Amicalola Falls, the highest waterfall east of the Mississippi. Overlooking the falls is a beautiful lodge. Both the lodge and the falls are within Amicalola Falls State Park. Glorious scenery, trout fishing, ziplining, guided hikes, archery and a GPS scavenger hunt can all be discovered in the park. Hiking ranges vary from an accessible pathway to a challenging trail, which if you complete you can join the park’s Canyon Climbers Club.  Amicalola Falls is 729 feet tall, cascading down the mountain in spectacular fashion to a reflection pool at the bottom.

Nearby is the Sautee Nacoochee Valley with Mt. Yonah (Cherokee meaning “Bear") casting its shadow over the heart of Georgia’s wine country. Perhaps not the world’s best known wine producing area, but it is not new.  Prior to prohibition, wine (as well as moonshine) was being produced in the Appalachians and today you will find some premium and award winning wines both red and white.