This wonderful fly-drive holiday will take you off the beaten track into rain forests, along the wild west coast & inland to see the great volcanoes. All these natural wonders will be combined with a few days in the vibrant city of Seattle itself surrounded by beautiful scenery. 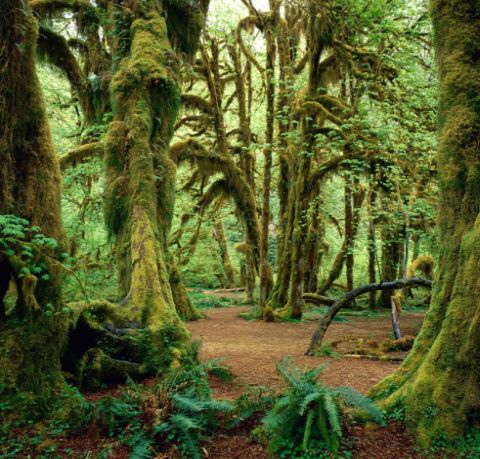 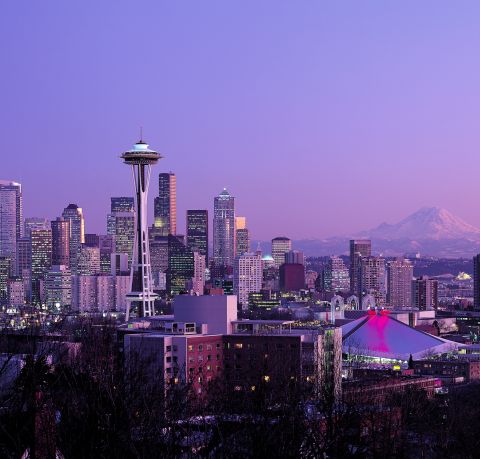 Your direct flight from London will get you into Seattle in good time to settle in to your downto...

Explore attractions of Seattle. Be sure to explore Pike Place Market and find Starbuck’s or...

A very short drive today (or you could stay an extra night in Kalaloch and visit Lake Quinault) a...

Today you will rejoin the Highway 101 south  towards Long Beach, Washington. Not only does t...

Drive to Mount Rainier, a massive stratovolcano, the highest peak in Washington and one of the mo...

It is only two hours from Mount Rainer to Seattle airport so there is plenty of time to catch you...

Your direct flight from London will get you into Seattle in good time to settle in to your downtown hotel and find one of the excellent restaurants for dinner.

Explore attractions of Seattle. Be sure to explore Pike Place Market and find Starbuck’s original coffee shop amongst a myriad of wonderful stores. To get a bird’s eye view of this lovely city, take a seaplane ride over Seattle or perhaps take a ferry to one of the islands. You might like to dine aboard the Royal Argosy as you sail through the off-shore islands or perhaps at the top of the Space Needle. You can also join a gourmet tour around the best bars and eateries or head out to Snoqualmie Falls which gained international fame when it featured in Twin Peaks.

You can also take a day tour to the Boeing Factory, the Native American Village at Tillicum in Blake Island State Park or perhaps join a wine tasting tour to Woodinville,  one of the Pacific Northwest's most abundant wine areas.

TIP Buy a City Pass which gives access to many of Seattle’s top attractions including the Space Needle and the Science Centre.

Collect your car this morning and depart on Washington State Ferry to Bainbridge Island and The Olympic Peninsula.   Delete The ferry stops at Port Townsend, Dungeness Spit, Hurricane Ridge before its final destination on the Peninsula:

Your final destination today will be in the region of Port Angeles where your choice of accommodation could include Lake Crescent Lodge, the Olympic Lodge or the delightful Colette's  b&b. En route we would suggest you visit the Suquamish Museum and Cultural Centre on the Kitsap Peninsula, Port Townsend, Port Ludlow and Hurricane Ridge which will introduce you to the stunning views you will come to expect to see on the Olympic Peninsula. (NB There can be snow on the ground as late as June!)

2 nights in or near Port Angeles

About two hour’s drive takes you to Kalaloch on the west coast but we would strongly recommend you stop en route in the Hoh Rainforest and Sol Duc Hot springs (where you can also spend a night), Forks, known to most teenagers as the home of the Twilight Saga and Ruby Beach said to be the most beautiful in Washington State.  The Quinault Indians first called this coastal land “Kalaloch” or “good place to land.” Their ancient and native culture is still a strong presence. The Pacific Ocean breaks upon miles of driftwood-lined beaches backed by the soaring evergreen forest. Your days will be spent beachcombing, hiking, fishing, bird watching or whale watching. Be sure to be near the beach at sunset as the colours can be absolutely stunning.

A very short drive today (or you could stay an extra night in Kalaloch and visit Lake Quinault) away from the coast and into the hills.  The Quinault Rainforest, is one of only three temperate rainforests in the Western hemisphere. You will find the largest Sitka Spruce tree in the world, along with Hemlock, Douglas Fir and Western Red Cedar trees. We would recommend that you take the Quinault Rainforest Loop, a 30-mile road that takes you around Lake Quinault. This is a very pretty drive and you might well see Roosevelt Elk, Black Tail Deer, Cougars, Bald Eagles, Bobcats, and even Black Bears.

Today you will rejoin the Highway 101 south  towards Long Beach, Washington. Not only does the beach live up to its name, but it was the end of the road for Lewis & Clark, the intrepid pair who in 1806 reached the West Coast from St Louis as directed by President Jefferson.  You will have time to explore the Lewis & Clark Interpretative Centre, the 28 miles of sandy beaches, Cape Disappointment, lighthouses and the seaside communities of Long Beach, Seaview and Oysterville as well as the Willapa National Wildlife Refuge.
2 nights in Long Beach area

Today you will cross the vast Columbia River twice as you drive towards Castle Rock which is the closest community to Mount St. Helen. There is a lot to do and see along the way including the Lewis & Clark Historical Park, the Astoria Column and the Columbia River Maritime Museum in Astoria.

Getting to Mount St. Helens is part of the fun as you will drive the Sprit Mountain highway for 54 winding miles from Castle Rock to the Johnston Ridge Observatory Along the way do stop to see the big screen presentation of the eruption in the Mount St. Helen's Visitor Centre,  (from where you can take a helicopter ride over Mt. St. Helens), Hoffstadt Bluffs Visitor Centre. Coldwater Lake is another good stop especially if you want to stretch your legs as there are some good marked trails here.  We suggest lunch at the quirky roadhouse, Patty's Place, known for its burgers, huckleberry pie and strawberry-rhubarb cobblers.

Drive to Mount Rainier, a massive stratovolcano, the highest peak in Washington and one of the most dangerous volcanoes in the world!  You will have seen it many times on your travels and it seems fitting that staying here will be the last night of your holiday.

Couples might enjoy the Stormking Spa retreat others might prefer the Paradise Inn at the entrance to the park.

It is only two hours from Mount Rainer to Seattle airport so there is plenty of time to catch your overnight flight back to London.

Seattle’s only waterfront hotel, the Edgewater is a curious looking building which...

Overlooking a rugged patch of Pacific coastline, The Kalaloch Lodge is a classic American...

Just 10 minutes from Castle Rock close to the communities of Kelso and Longview, the Red...